The Regulation includes core requirements that apply to all producers and stewardship programs with specific product category provisions listed in schedules.  All ready-to-drink beverages sold in the province are required to be offered for sale in recyclable or refillable containers. All are subject to a deposit; with the exception of milk and milk substitutes.

The deposit-refund system is operated by the beverage producers and there are no statutory fees or charges remitted to government under the system. To carry out deposit-refund obligations within a common province-wide system, beverage producers have formed two stewardship agencies. Brewers Distributor Ltd. (BDL) serves as a stewardship agency for most domestic beer and some cider brands. Encorp Pacific (Canada) serves as the industry’s container stewardship agency for all other beverage types including wine, coolers, spirits, some import beer and all non-alcoholic beverages.

The Recycling Regulation prescribes deposit-refund requirements for sellers of containers. All retailers selling beverage containers are to collect beverage container deposits at the point of sale and pay refunds for redeemed containers of the same type and brand that the retailer sells in an amount equal to the deposit collected. Retailers are entitled under the regulation to limit the total number of returns to 24 containers per person per day. Further, retailers are not required to accept any container that is contaminated, rusty, dirty, was purchased outside of the province or cannot be reasonably identified as a deposit bearing beverage container.

Restaurants and pubs are charged deposits by the appropriate stewardship agency and are responsible for the redemption of containers, but are exempt from charging the consumer the deposit if the beverage is consumed on the premises.

Stewardship program funding is the responsibility of the producer. Both Encorp Pacific and Brewers Distributor Ltd. pay various handling fees to authorized depots and contracted retailers.

British Columbia's deposit law is managed by Encorp Pacific, an industry consortium comprising the soft drink and grocery industries, with a program called the Return-It program. A multi-stakeholder advisory group (the Container Management Board) oversees the system. This board has no decision-making powers but advises the Minister on issues relating to the system. The Minister holds the power over decisions on the nature and evolution of the system.

Beverage containers can be returned either retailers or special Return-It depots regulated by Encorp. Retailers must, by law, take back what they sell, up to 24 containers per person per day. Encorp also suggests, "Alternatively, you may want to hold onto your containers so that they are ready when your community fundraising groups come knocking."

Encorp provides the equipment and expertise for collecting containers, paying out deposits, processing containers and marketing the scrap materials. Depot operators register with Encorp and are kept a sufficient distance apart so they do not cannibalize each other's territory.

Since May 19, 2014, the collection and recycling of all milk containers has been transferred to a new program operated by Recycle BC.

For more information about the CRF, go to http://www.return-it.ca/beverage/products/.

In BC, beer containers are not exempt from beverage container legislation. The system is still return-to-retail, operating as an independent system. Beer, wine and spirits are sold through government operated Liquor Commission stores and a limited number of Cold Beer and Wine stores, mostly attached to hotels. Refillable bottles are recovered for full deposit at the Liquor stores and the Cold Beer and Wine stores. Bottles that are returned to the Return-It depots are discounted by the depot operator who then returns the bottles to the brewers.

The regulation expanded the previous deposit-return system to include all ready-to-drink beverages except milk, milk substitutes and meal replacements.  Under the regulation, all beverage containers must be refillable and no containers recovered by the system can be landfilled or incinerated [2].

Encorp, the not-for-profit body responsible for administering the recycling program in BC charges a “recycling fee” affixed to some products ( plastic, glass, some drinking boxes, and poly cups) in order to operate. The fee was previously included in the purchase price, but now is shown separately to demonstrate to consumers the price of recycling.

5. Source: Clarissa Morawski. "British Columbia." WHO PAYS WHAT: An Analysis of Beverage Container Recovery and Costs in Canada. 2010 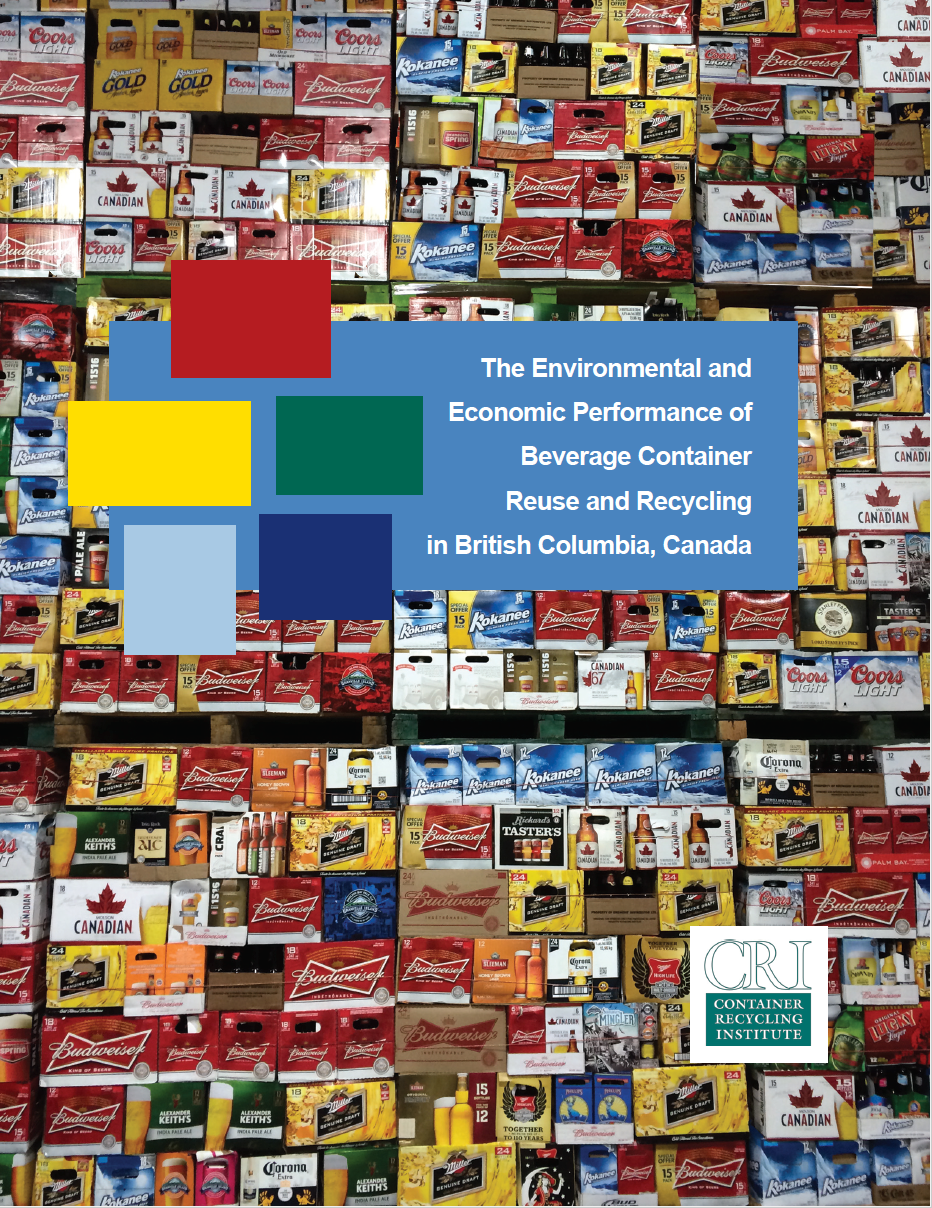 BC Case Study: The Environmental and Economic Performance of Beverage Container Reuse and Recycling in British Columbia, Canada - August 2015

The Container Recycling Institute (CRI) undertook this case study of British Columbia’s container deposit-refund law (CDL) for two reasons: first, to expand CRI’s existing body of research on best practices for the recovery and quality recycling of packaging materials; and second, to investigate recent increases in container recycling fees (CRF) in the province, especially for glass containers. Get a Download Link