The Fate of Unclaimed or Abandoned Deposits

What are “unclaimed deposits”?

In ten U.S. states,1 beverage distributors and retailers are required by law to collect small deposits (usually a nickel or dime) on certain packaged beverages.2  When consumers return these beverage containers to a retailer or redemption center, the deposits are returned to the consumers. When consumers choose not to redeem their used beverage containers for the deposit value (either because they recycled them through curbside, drop-off, or public space recycling programs--or because they threw them in the trash or littered them), the deposit money is considered “unclaimed.” Other terms are “abandoned” and “unredeemed.” Depending on the state, unclaimed deposit funds are retained by beverage distributors, state agencies, or a combination of the two, and are used for various purposes described below.

How are unclaimed deposits calculated?

Unclaimed deposits for a given time period, usually a year, are calculated by multiplying the deposits initiated in that year (deposit monies paid for containers sold) by the rate of non-redemption. The non-redemption rate is simply 100% minus the redemption rate.

What are the redemption rates in the deposit states? 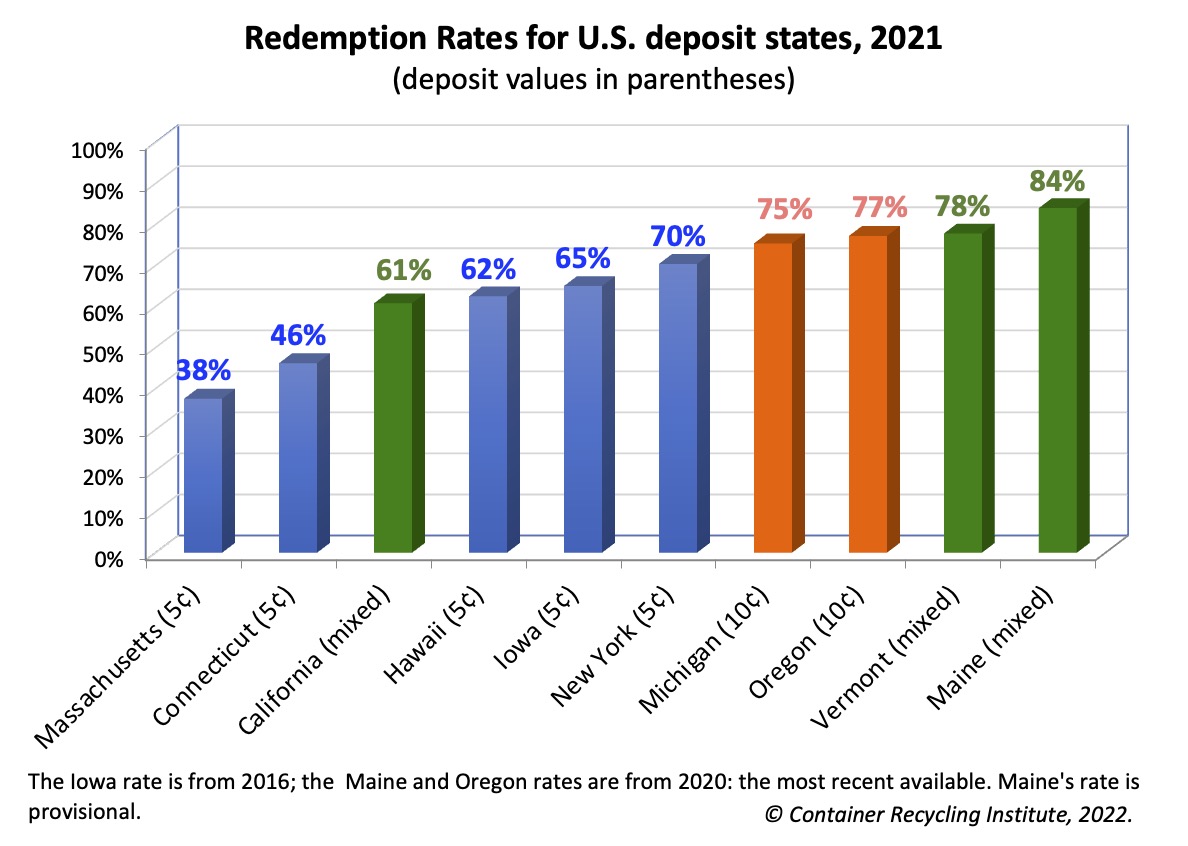 Since all of the deposit states also have municipal recycling programs, some of the unredeemed containers are recycled either through curbside programs or drop-off sites.

There is no one-size-fits-all answer to this question; it depends on the state. We've grouped the systems by category: state-managed systems, and systems managed by the beverage industry.

In California and Hawaii, state agencies manage and control the finances of the beverage container deposit system. In California, the agency is CalRecycle; in Hawaii, it is the Department of Health. These agencies collect deposits from distributors when the beverages are sold to retailers. The bottler or distributor pays the deposit directly into a state-managed fund and collects the deposit from the retailer. The retailer then collects the deposit from the consumer. Refunds are paid to the consumers out of the state-managed fund, which is also used to pay for program operation and administration. Hawaii's fund also receives one penny per container from beverage manufacturers to help fund the program. In both states, 100% of unclaimed deposit monies are used by the state agencies* to manage the system, educate the public, and promote markets for recycled material.

*Note that CalRecycle does not use the same terminology other states do; unclaimed deposit revenues are described as the difference between CRV-in (deposits initiated) and CRV-out (deposits paid back to the consumer).

In the other eight U.S. deposit states, operations and financing are managed by the beverage industry, and unclaimed deposits are kept by various entities for multiple purposes:

Oregon's program operator, the Oregon Beverage Recycling Cooperative (OBRC), reports that they also receive $9 million per year in funding from the beverage distributors and grocery retailers. 13 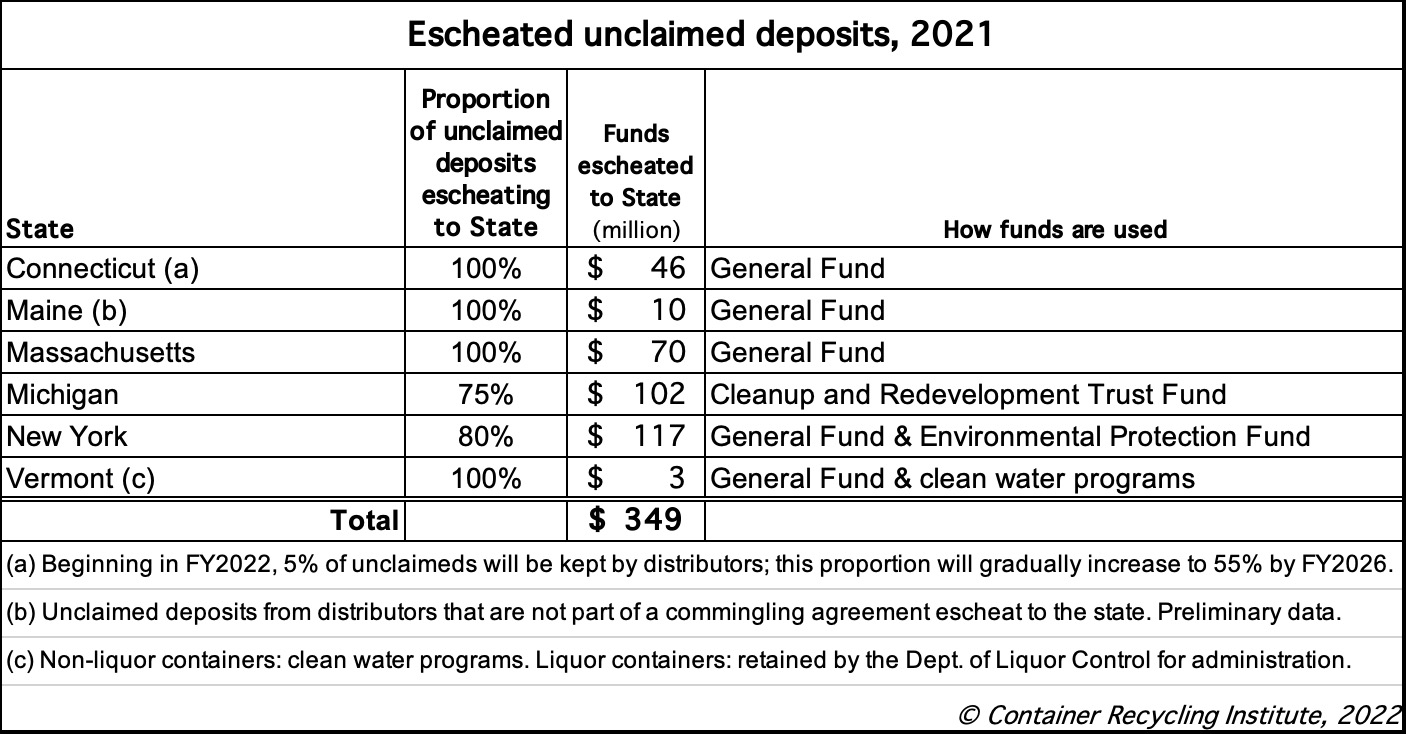 **A note about escheats: Generally speaking, an "escheat" is simply the right of a government to take possession of unclaimed property.  When state container deposit laws permit beverage distributors or retailers to keep some or all unclaimed deposits, those are not escheats. "Escheats" in the deposit-recycling world only refer to those unclaimed deposits that state governments keep by law.

From 1991 to 1994, the principle of escheating unclaimed deposits survived beverage distributors' legal challenges in three states:

How have escheated unclaimed deposits been used?

Escheated unclaimed deposits have been used for both environmental purposes and to supplement a state's general fund.

2) Maine: Maine’s escheat law was enacted in 1991.9 Unlike the laws or provisions in Massachusetts and Michigan, Maine collected only 50% of the abandoned deposits, and the distributors and bottlers retained the other 50%. The revenue was used to fund the Maine Solid Waste Management Agency. Since the state received only half of all unclaimed deposits, and because Maine’s redemption rate for beverage containers was so high, the state chose to repeal the law in 1995, just a few years after it was implemented, because the State was afraid they might have to pay out more than it took in. A new escheat law came into effect in 2004, in which all unclaimed deposits escheat to the state except those on containers that are part of a distributor commingling agreement. (See the Maine Quick Facts page for more information on commingling agreements)

The intent of Massachusetts’ original law was to use the CEF exclusively for solid waste management, with specific proportions earmarked to provide support for recycling, composting, solid waste source reduction, and other environmental programs related to the bottle bill.5 However, the actual allocation of the funds has been subject to appropriation by each subsequent legislature. Instead of receiving up to $226 million available from the CEF from FY 1990 to FY 2002, no more than $60 million (27%) was used to stimulate and support recycling, the bottle bill, and other innovative solid waste programs.6 The other $166 million (73%) went toward Department of Environmental Protection (DEP) overhead costs unrelated to the original mandate of the law. Since .7

4) Michigan: Michigan’s escheat law was also passed in 1989.8 The law calls for 75 percent of the unclaimed deposits to be transferred into the Cleanup and Redevelopment Trust Fund, overseen by the Michigan Department of Treasury, and the other 25 percent to be distributed by the Treasury to retailers as a way to offset their handling costs.

Amended in 1996, the law specifies how the state must distribute its share of the unclaimed deposits. Eighty percent of this Cleanup and Redevelopment Trust Fund is immediately available for appropriation for municipal landfill cost-share grants, matching federal Superfund dollars, response activities addressing public health and environmental problems, redevelopment facilitation, or emergency response actions. Ten percent is deposited into the Community Pollution Prevention Fund, and the remaining 10 percent is deposited into and must remain in the Cleanup and Redevelopment Trust Fund until the amount accrues to a maximum of $200 million.

6) Vermont: Unclaimed deposits in Vermont are used to fund the Clean Water Fund, which is used to help municipalities, farmers and others implement actions that will reduce pollution washing into Vermont’s rivers, streams, lakes, ponds and wetlands.

Who should keep unclaimed deposits?

Beer distributors and soft drink bottlers argue that any unredeemed deposits should be utilized to help them offset their costs of managing the container deposit return system. Others argue that the beverage industry is already keeping revenue from the sale of scrap container materials (aluminum, plastic and glass) as well as the “float” (deposits collected from retailers that can be invested for short-term returns), and that unclaimed deposits are tax-free, windfall profits for the bottler/distributor. They argue that unclaimed deposits, like other types of abandoned property, should belong to the state and be used for public benefit. Nearly every deposit state has attempted to escheat the unclaimed deposits as a source of revenue, usually to fund environmental programs.

The economics of each state's program are unique, and depend upon several factors, such as the mix of material types (e.g., aluminum, plastic and glass), the collection mechanism, access to markets for recyclables, and the legislated handling fee. Some distributors are likely making a net profit because the revenue from unredeemed deposits and sale of scrap add up to more than the handling fees paid out and transportation costs.

However, as the mix of materials shifts away from aluminum and toward plastics, programs become more costly.

1. The states are Oregon, Vermont, New York, Michigan, Connecticut, Iowa, Massachusetts, Maine, California and Hawaii. Guam passed a deposit law in 2011,but it has not yet been implemented.

4. Massachusetts escheat legislation can be found below and at http://www.state.ma.us/legis/laws/mgl/94-323B.htm.

8. Michigan escheat legislation can be found below and at www.deq.state.mi.us/documents/deq-wmd-swp-Bottle-Bill.doc.

9. Maine escheat legislation is reprinted at the end of this document.