What is a Bottle Bill?

All about bottle bills

No time to read this whole website? View the PowerPoint presentation instead. Container Deposit Legislation: Past, Present, Future provides a quick look at the most important facts about bottle bills. This presentation is also a great tool for activists needing to present information in support of a bottle bill.

How a bottle bill works

Deposits on beverage containers are not a new idea. The deposit-refund system was created by the beverage industry as a means of guaranteeing the return of their glass bottles to be washed, refilled and resold.

When a retailer buys beverages from a distributor, a deposit is paid to the distributor for each can or bottle purchased. The consumer pays the deposit to the retailer when buying the beverage. When the consumer returns the empty beverage container to the retail store, to a redemption center, or to a reverse vending machine, the deposit is refunded. The retailer recoups the deposit from the distributor, plus an additional handling fee in most U.S. states. The handling fee, which generally ranges from 1-3 cents, helps cover the cost of handling the containers. 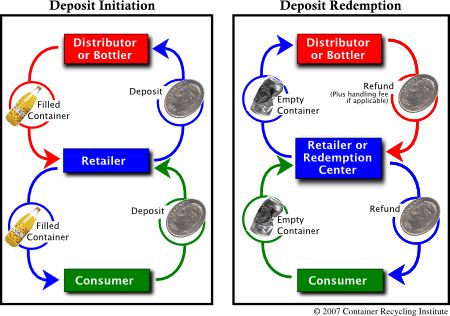 These "unclaimed" or "unredeemed" deposits remain the property of the distributors and bottlers in most states, and amount to millions of dollars a year. In Michigan and Massachusetts, the courts have ruled that because these unclaimed deposits are "abandoned" by the public, they rightfully belong to the state, and they are now used to fund environmental programs in those states. In Hawaii and California as well, the state collects all of the unredeemed deposits, which are then used to administer the deposit system. Learn more about unclaimed deposits here.

In short, bottle bills create a privately-funded collection infrastructure for beverage containers and make producers and consumers (rather than taxpayers) responsible for their packaging waste. There are many other reasons to institute a bottle bill, which are described in the section "Benefits of Bottle Bills."

With so many recyclable materials out there, people wonder why it's worthwhile to focus on beverage containers only. One reason is that beverages compose 40-60% of litter. A deposit encourages people to return these containers, keeping them off the streets and out of the waterways and wilderness. According to industry estimates, one-third of beverages are consumed on the go—away from the home recycling bin and often in places where recycling is not available. The refundable deposit helps ensure that these containers are saved and recycled. In addition, recycling beverage containers rather than manufacturing new ones prevents the consumption of enormous amounts of energy and the emission of great quantities of greenhouse gas emissions. 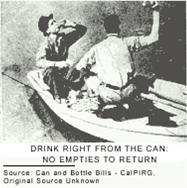 For decades we drank our beer and soda from refillable glass bottles that were reused dozens of times before being discarded. Then, in the 1930’s, the steel beverage can was introduced on the market, revolutionizing the beverage market. Unbelievably, consumers were encouraged to toss their empty beer cans out wherever they happened to be.

It was not until after World War II that cans began replacing glass bottles in the beer industry. The convenience and disposability of cans helped boost sales at the expense of refillable glass bottles, and by 1960 approximately 47 percent of beer sold in the U.S. was packaged in cans and no-return bottles. Soft drinks, however, were still sold almost exclusively in refillable glass bottles requiring a deposit. Can market share was just 5 percent. With the centralization of the beverage industry, and a more mobile and convenience-oriented society, the decade of the sixties witnessed a dramatic shift from refillable soft drink ‘deposit’ bottles to ‘no-deposit, no-return, one-way’ bottles and cans.

The gradual demise of refillable beer and soft drink bottles in the fifties and sixties and the rise in one-way, no-deposit cans and bottles resulted in an explosion of beverage container litter. This prompted environmentalists to propose bottle bills in their state legislatures that would place a mandatory refundable deposit on beer and soft drink containers.

The first bottle bill was passed in Vermont in 1953. However, it did not institute a deposit system. It merely banned the sale of beer in non-refillable bottles. The law subsequently expired four years later after strong lobbying from the beer industry.

By 1970, cans and one-way bottles had increased to 60 percent of beer market share, and one-way containers had grown from just 5 percent in 1960 to 47 percent of the soft drink market. British Columbia enacted the first beverage container recovery system in North America in 1970.

In 1971, Oregon passed the first bottle bill (also known as a deposit law) in the United States, requiring refundable deposits on all beer and soft drinkcontainers. By 1986, ten states (over one-quarter of the U.S. population) had enacted some form of beverage container deposit law or bottle bill.

The so-called 'bottle bills" were intended not only to reduce beverage container litter, but to conserve natural resources through recycling and reduce the amount of solid waste going to landfills. They proved to be extremely successful in achieving those goals.

Today, ten states and every Canadian province have a deposit law requiring refundable deposits on certain beverage containers. Although bottle bills meet with opposition from many members of the beverage and grocery industry, several states and provinces have expanded their laws to cover beverages such as juice and sports drinks, teas and bottled water—beverages that did not exist when most bottle bills were passed.