Bill has been referred to House Rules committee and is scheduled for discussion on March 7.

Handling Fee: 1½¢, paid to the Department of Finance and Administration

The "Beverage Container Litter Reduction Act" (HB 2771) was introduced in the 2007 legislative session on March 5 by Rep. Johnnie Roebuck (D-Arkadelphia.)  Although she succeeded in getting over 20 co-sponsors of the bill in the Arkansas House as well as a number of co-sponsors in the Senate, the bill died in the House Rules Committee.

Supporters of the bill, although disappointed in the outcome in 2007, were buoyed by the endorsement by the Association of Counties, County Judges Association, Farm Bureau, and the Department of Highways, among others, as well as the grassroots support of numerous Arkansas students (pictured below at an anti-litter rally). 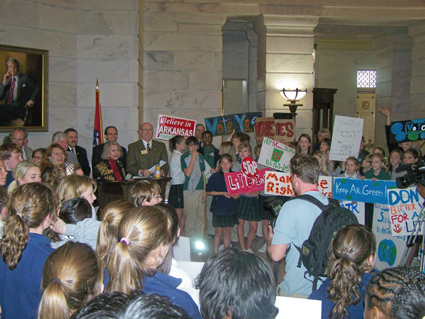 Representative Johnnie Roebuck
870-403-4382
This email address is being protected from spambots. You need JavaScript enabled to view it.

In the meantime, Arkansas bottle bill supporters are not simply sitting quietly.

The main group of activists for the bill is Save Our Spring River, a small organization doing its best to get some large, influential groups involved in the campaign.

Ruth Reynolds of Save Our Spring River has been asking Arkansas quorum courts to pass a resolution of support for a state bottle bill, and has already received the endorsements from the quorum courts in Izard County, Van Buren County, Sharp County, and Stone County.

The list of other organizations supporting the bill includes:

Summary of Activity: To Committee on House Rules 3/12. Withdrawn by bill's own supporter from further consideration. Died in committee. To be reintroduced when the legislature meets again in 2005.