Scenic Hudson's annual Great River Sweep is a nine-day event that unites Hudson Valley residents to perform waterfront cleanups. The effort connects thousands of volunteers from the Adirondacks to Manhattan in removing trash and beautifying the Hudson River's shorelines, tributaries and public places. It is held the last full week of April, beginning on Saturday and ending the following Sunday, in coordination with Earth Day. In 2002 the project involved approximately 5,285 volunteers at 176 planned cleanups in gathering and properly disposing of tons of trash. 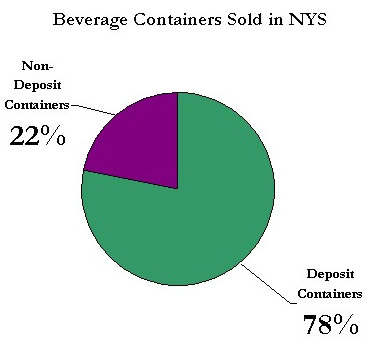 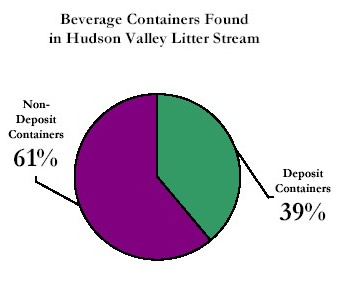 Volunteers separated beverage containers from other debris and counted the number of New York State returnable containers and non-New York State returnable containers found. Beverage containers tallied included beer, bottled water, fruit juice, iced tea, liquor, milk, soda, sport drinks, wine, wine cooler, etc. Accurate separation of debris was confirmed through random cleanup site inspections for 54% of cleanup coordinators performed by Scenic Hudson staff and experienced volunteers serving as regional cleanup coordinators. The data was recorded by volunteers in the field and compiled in this report by Scenic Hudson staff. It is the goal of this survey to accurately and professionally represent the findings of this survey as they pertain to beverage containers found at Great River Sweep cleanup sites.

A Summary of Results

Nine percent of the New York State beverage containers that were collected were redeemed. Despite Great River Sweep participants' interest, most containers were so soiled that they were not accepted by redemption centers.

Scenic Hudson hopes that this information will help advance the litter-reduction and recycling goals of New York State and the bottle bill deposit law.

Scenic Hudson's mission is to ensure that tomorrow's Hudson River Valley - from Manhattan to the foothills of the Adirondacks - is environmentally and economically sustainable and that its capacity to awe and inspire residents and visitors is preserved forever. To implement our mission, we forge partnerships with local citizens groups, governments and businesses to preserve landscapes, foster community planning, improve air and water quality, and promote environmental awareness.