The presence of a bottle bill in a state generally results in much higher materials recovery rates--which benefits the ecosystem by reducing litter, andsupports the recycling industry, which depends on a constant stream of recyclable materials. Increased recovery leads to increased recycling, which reduces resource depletion through manufacturing. The line graph below shows the recycling rates in 5 states with bottle bills, as compared to the national average. Below are summaries of how deposit laws in 10 states affect their recycling rates. 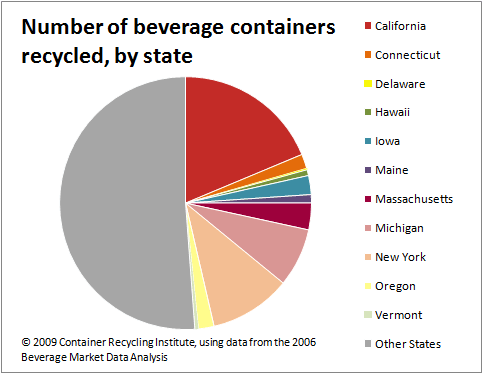 The overall recycling rate for beer and soft drink containers was 80 percent in 1996. A comparison of 1988 and 1996 recycling rates reveals that AB 2020 has had a significant impact on the recycling of all beverage container materials.

According to rough estimates of refuse tonnage in 1980-81, the Connecticut DEP credited the bottle bill with a 5-6 percent reduction in overall solid waste.

There are no published reports or surveys indicating the impact of Delaware's bottle deposit law on solid waste.

Beverage containers are returned at rates ranging from 56 percent for spirits to 95 percent for beer and soft drink cans. The Iowa Soft Drink Association estimates that approximately 6,068 tons of plastic, 14,445 tons of aluminum and 2,916 tons of glass soft drink containers were recycled through Iowa's bottle bill in 1995. The Iowa Liquor Commission estimated the amount of beer, wine and liquor containers recycled through the bottle bill to be 26,720 tons.

Iowa's DNR estimated that 1.4 billion deposit cans and bottles, weighing 50,000 tons were redeemed and recycled through the bottle bill in 1995. The 50,000 tons of redeemed containers represent 5 percent of the 1 million tons of waste diverted from the waste stream in 1995, according to the DNR. Iowa's waste reduction efforts are enhanced by the fact that 10 percent of its beer is packaged in refillable bottles. Iowa is one of only 5 states that have a 10 percent or greater portion of beer sold in refillables.

The Waste Management Agency estimated in 1993 that the amount of waste diverted by the deposit law was 54,000 tons, or approximately 14 percent of the total waste diversion. The Maine Municipal Association, an association of municipal governments, actively opposed repeal of the deposit law in 1996. They claimed that without a bottle bill, approximately 48,000 tons of materials currently being recovered through the bottle bill would enter the waste stream and increase municipal recycling and disposal costs.

Maine is a rural state, with 70 percent of the 1.2 million people living in towns with a population under 10,000. As recently as 1991, there were just 18 curbside programs serving 14 percent of the population. By 1994, the number of programs had grown to 64 programs serving 33 percent of the population, according to the Maine State Planning Office. The tremendous growth in curbside recycling opportunities occurred within four years after the bottle bill was expanded to include all beverage cans and bottles except cider and dairy product containers.

The DEP reports that in 1995 more than two-thirds of Massachusetts' residents (69 percent) were served by 143 curbside recycling programs, and of the 456,259 tons of residential waste diverted in 1995, 71,199 tons (16 percent) were diverted through the bottle bill.

In the seven years after distributors and bottlers were required to report the number of containers redeemed, redemption rates fluctuated between 74 percent and 87 percent. The peak year was FY 1995, when 87 percent of deposit containers were returned for the nickel refund. The redemption rate for FY 1996 was 81 percent.

According to the Michigan Department of Natural Resources, the bottle bill, in 1990, was reducing Michigan's solid waste stream by 6-8 percent each year. Michigan currently has approximately 200 curbside recycling programs serving 25 percent of the population. Of all the states with bottle bills, Michigan has the highest recycling rate. It also has the highest refund value.

A detailed report by Franklin Associates, Ltd. estimated that the volume of discarded beverage containers was reduced by 72 percent annually, from 47.5 million cubic feet to 13.1 million cubic feet. The study estimated that the 34.1 million cubic feet saved by the deposit law was approximately equal to all of the municipal waste generated by a city the size of Rochester over a period of nearly three years. The study also found that recycling rates increased dramatically after the bill's passage, with aluminum cans increasing from 18 percent to 82 percent; glass one-way bottles from 5 percent to 79 percent; and PET bottles from 1 percent to 57 percent. Finally, the study estimated the deposit law saves the state 11.5 trillion BTU's (British thermal units) or the equivalent of 2 million barrels of oil annually.

Both waste, and waste management costs were expected to be substantially reduced according to preliminary findings by the NYSBWA study. The study estimated an annual reduction of solid waste tonnage of 650,000 tons, at a savings to taxpayers of $19 million a year. The bottle bill continues to serve as a valuable waste management tool, according to the NYDEC, which reports that redeemed deposit containers account for 5 percent of the total 6.35 million tons of waste diverted in FY 95-96.

A savings of $656,832 in trash pick-up, hauling and landfilling was reported the first year after enactment. According to the DEQ, the high return rates for deposit containers, guarantee that large amounts of glass, aluminum and PET are recycled. The deposit system also provides a steady supply of clean, sorted recyclables that boost recycling markets. The DEQ reports that Oregon's bottle bill had a positive effect on the recycling of other materials through increased public awareness and education.

A 1989 Glass Packaging Institute (GPI) press release prompted a letter from Fred Hansen, then the Director of Oregon's DEQ. The letter stated, "The Department believes that curbside recycling and deposit legislation are fully compatible, and that the two together complement the many other recycling opportunities in Oregon. . ."

The DEC estimates that 15,854 tons of beer, soft drink, and liquor containers were diverted from the waste stream and recycled in 1994, an increase of 3,499 tons over the tons diverted in 1993. The 15,854 tons of deposit containers recycled represents 6 percent of total waste diverted in 1994. The DEC also reports that, despite the rural nature of the state, approximately 52 percent of Vermonters have access to roadside collection of recyclables.