South Australia was the first Australian state to enact deposit legislation. As other states follow suit with proposed deposit refund systems, this system is commonly used as their model.

The Recyclers of South Australia have put together a detailed chart on their website explaining the steps in the deposit-return process. This is a duplicate version.

*While still approved as a super collector/collection co-ordinator, Flagcan Distributors is not currently operating in the system. 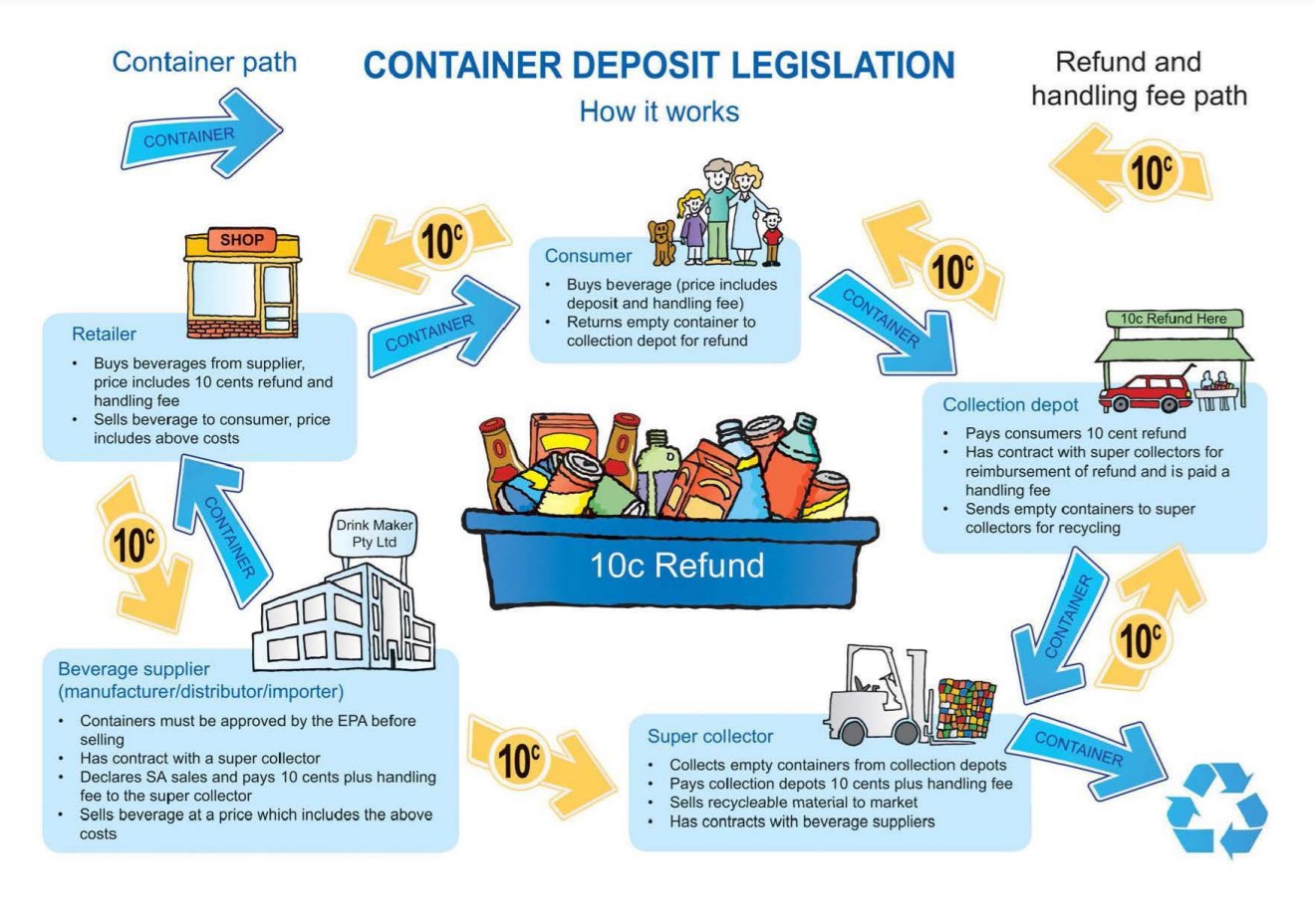 In 2008, the deposit/refund amount was changed to 10¢ per container, regardless of "Category" (Previously it had been 10¢ for Category A and 5¢ for Category B). According to the South Australia EPA, "The State Government has increased the deposit amount on beverage containers to encourage more South Australians to recycle. By increasing the incentive to recycle, less litter will be seen on our streets and less waste will be sent to landfill."

The Northern Territory was the second Australian territory to enact a deposit law, which was modeled on the South Australia law. The two territories signed an agreement in 2011 to align their container deposit schemes. The agreement also addresses the issues of minimizing border fraud and increasing recovery and recycling while reducing litter. [5]

In 2019, Southern Australians were invited to give feedback on how to improve the CDS by the Government of South Austalia. Feedback could be given through completing a survey, emailing, or physically mailing a response, as well as participating in a discussion on the government's online consultation hub, YourSAy. Online feedback reception ended in February 2019. Three meetings were held between the EPA and key stakeholders from February to September 2019. The EPA Board hosted its annual CDS summit in 2019 to facilitate discussion on ways to reform and improve the CDS. A consultation summary report of the review was released in August 2019. Further review and planned reforms are still pending as of December 2020.

Beverage containers do not need to be sorted prior to taking them to a collection depot. Currently, 127 depots operate in South Austalia. To find one, please refer to the EPA's list of approved collection depots. All beverages covered by the CDS in South Australia must carry an appropriate refund marking. An example is shown below:

There are two categories of beverage containers, A and B. Category A containers are approved to be returned for refund to any outlet where that beverage is sold; these comprise less than 1% of beverages sold. Category B containers are approved to be returned to collection depots for a 10-cent refund. Both categories have their own approved refund markings. [6] Beverages may also use common refund marking, which is approved refund marking for use in all Australian jurisdictions operating a container deposite scheme, namely Northern Territory, New South Wales, Queensland South Australia and the Australian Capital Territory.

[5] "Historic agreement to coordinate recycling in SA and NT." Legislative Assembly of The Northern Territory. 06 December 2011.